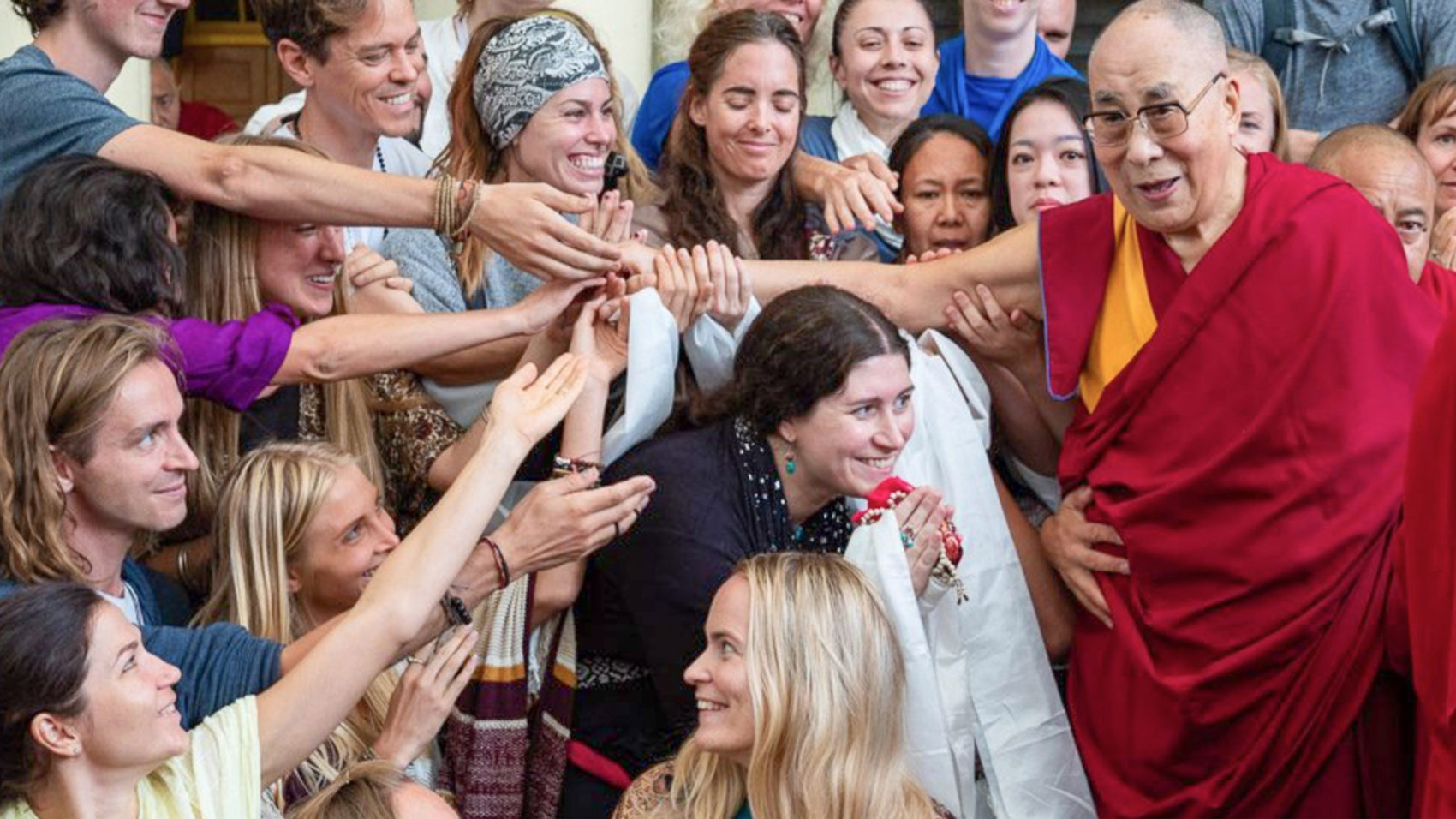 Meeting The Dalai Lama In The Himalayan Mountains

The Dalai Lama spoke about living with compassion first. That loving kindness is the way. That educating ourselves and our children about logical thinking could single handedly allow us to avoid repeating all the same mistakes of the 20th century over again. And that it will be our actions now and then onward from here that can bring a new day forward for humanity — a day where through first embracing our collective sameness we can each start on a path to achieving our truest nature. The exact same nature that will then award all other people access to their same fundamental nature as well…happiness.

It was six am and the birds were singing. The sun was beginning to appear over the mountain’s peak that we were descending. It was as if we were scaling downward from the massive rocky gateway which grants access to the mighty Himalayan range looming above Dharamshala, India.  The two of us had somehow ended up at this unusual speck on the global map not just to train and further our yogic journey, but because we had hoped to experience some of the Tibetan culture which had exiled itself here along with its spiritual leader so many years ago. It was our hope to find a new energy and perspective — one that might help us along our way… and it was amidst these mountain trees, winding roads, and packs of stray dogs and wild monkeys that we indeed had found something special here. Completely unimaginable. 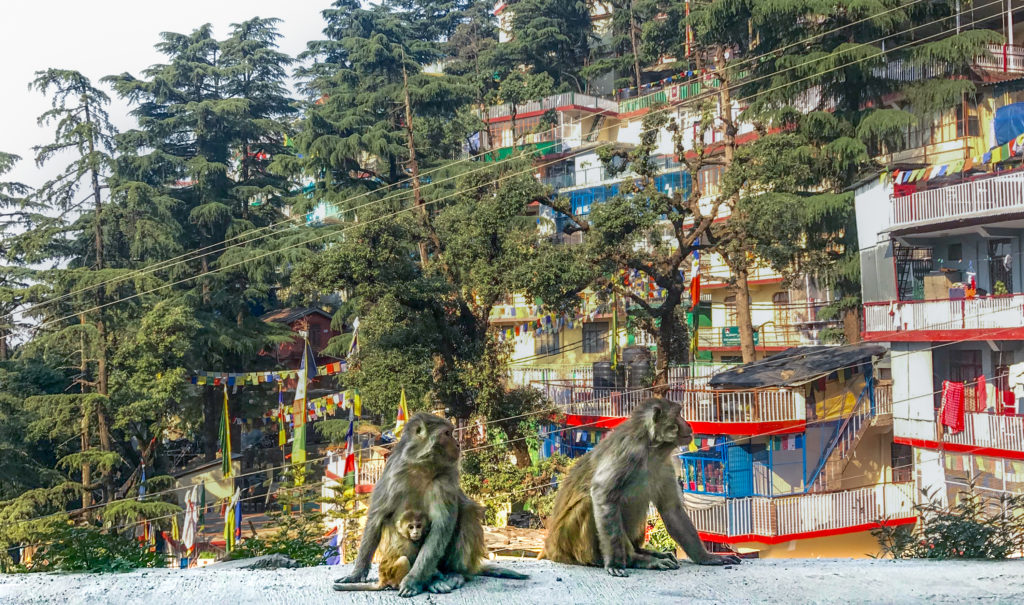 Himalayan Monkeys, on the road down to Mcledo Ganj

Houses stacked upon each other and built up the mountain sides. Coloured Prayer flags drifting from rooftops and across almost every alleyway dancing in the breeze. Cows and yaks meandering and mingling with the locals in the streets.  It was at that moment, there in the fresh morning Himalayan air, that I think we both realized we were walking our own personal pilgrimage. From Dharamkot up on the mountain to The Dalai Lama’s home in Macleod Ganj. We were going to sit in on a special unannounced teaching open only to foreigners.  Why? Well, because somehow the stars had aligned.

His Holiness doesn’t speak publicly as much as he used to from his home and temple here in Dharamshalla. For years he had a monthly open house for anyone who wanted to come but now his website explains that he is semi-retired and he has pruned his local appearances down to only a couple of special times per year. Amazingly enough as you scroll through his social media and home page you can see how incredibly active he still is all around the world.  Very inspiring for a man of such an age- amazingly enough as we are posting this today it’s The Dalai Lama’s 83rd birthday! 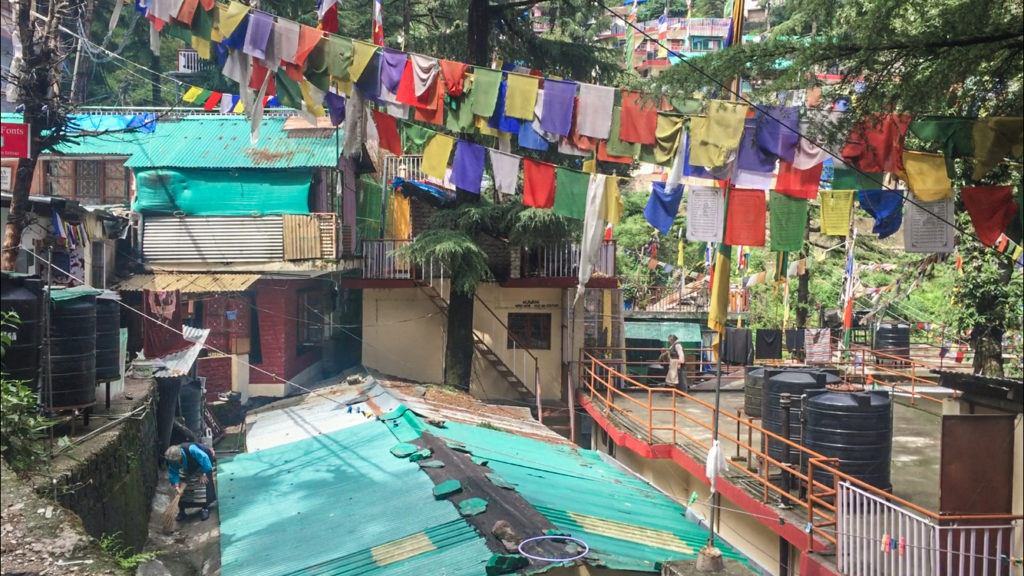 Almost all of the students from both of our Yoga schools were with us. Somehow against so many odds, this was happening for all of us. When this event was quietly announced locally only, the two of us had helped organize our schools to fit this Saturday afternoon into our respective curriculums. Well, truth be told the head teacher of my school wasn’t having it so easily so I nearly created a walkout of sorts. One way or another I was going, and I wasn’t actually that concerned because I knew in my heart that this would contribute to my spiritual growth more than almost any certified piece of paper that they could threaten me losing might. But the power was in the people that day. Just like it always is. And I couldn’t stop revelling in the idea that we had all been brought to this little nook of the planet from all corners of the globe just at this right moment. 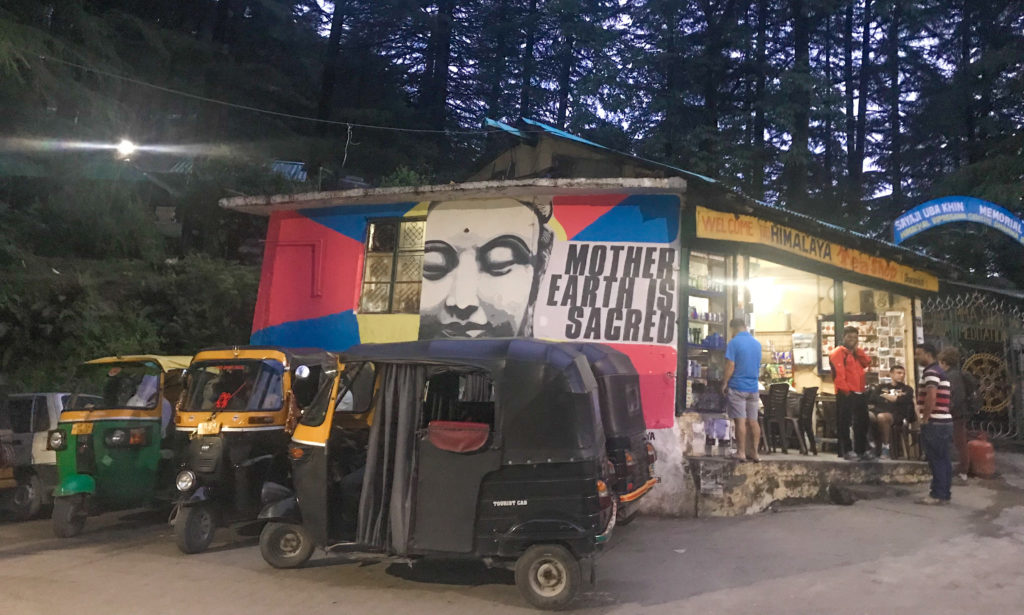 The streets were unusually quiet as we strolled through. Normally Macleod Ganj is a madhouse. We easily prefer to be up the mountain in Dharamkot where the cool breeze and the dogs and the odd tuk tuk wizzing by keep the gears grinding at a tranquil and relaxing pace. Down here in Macleod, maniacs and peace mongers and tourists and spiritualist wanderers all meld together on the tiny streets filled with honking horns, roaming livestock, and a whirlwind of energy brought forward by the fused cultures of those parading around for the myriad of different reasons that brings them all there. If you understand the reference, Macleod Ganj is just like Mos Eisley but with fewer space ships. I bought some lychees from a man on a corner, and stared at them like I hadn’t eaten in days. It was nice not to have traffic to navigate through and motorbikes and people belligerently swerving, yelling, and honking at each other at every given moment. 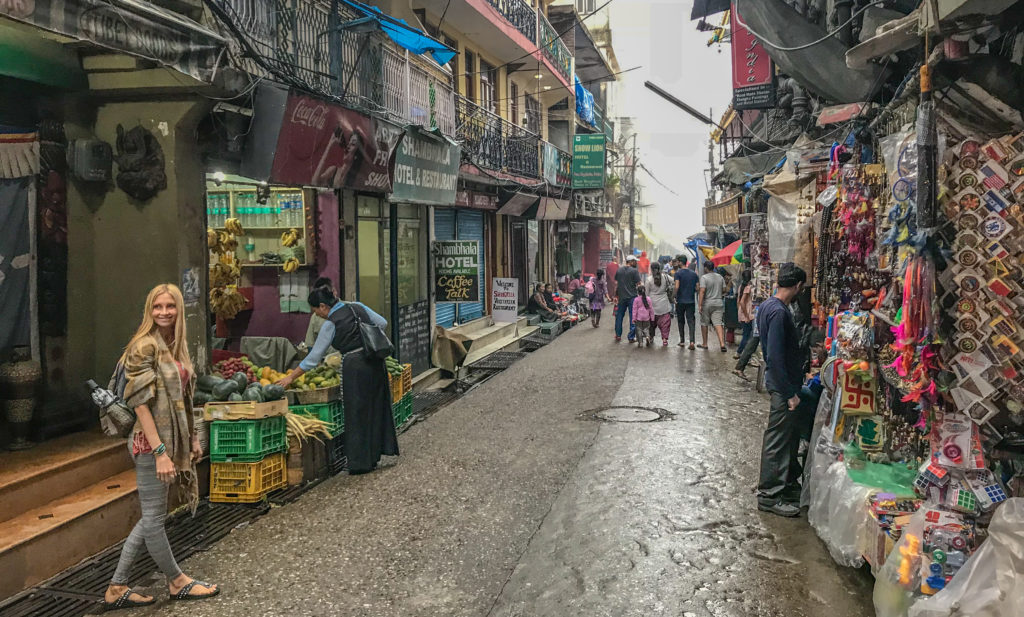 We were expecting The Dalai Lama’s temple to be a zoo, as if the Beatles might still be alive and playing one last show with lineups of people waiting outside for days to ensure entrance. But that was far from the case.  We all pretty much strolled right in with our passes that we had registered to receive two days before. Once inside, I took a moment with my Swedish yogini friend, Alex, to spin some Tibetan Prayer Wheels and then waited where we were told for what seemed a loose and unorganized affair. To me it was especially relaxed for one of the earth’s most predominant spiritual leaders preparing to appear. When I was 7 years old, I once stood in the rain for four hours on the side of the road to watch the Pope zip by in his bullet proof pope-mobile at what seemed 88 miles an hour. But I realize now that the Dalia Lama’s temple wasn’t “loose”, it was just peaceful, exactly how it should be. 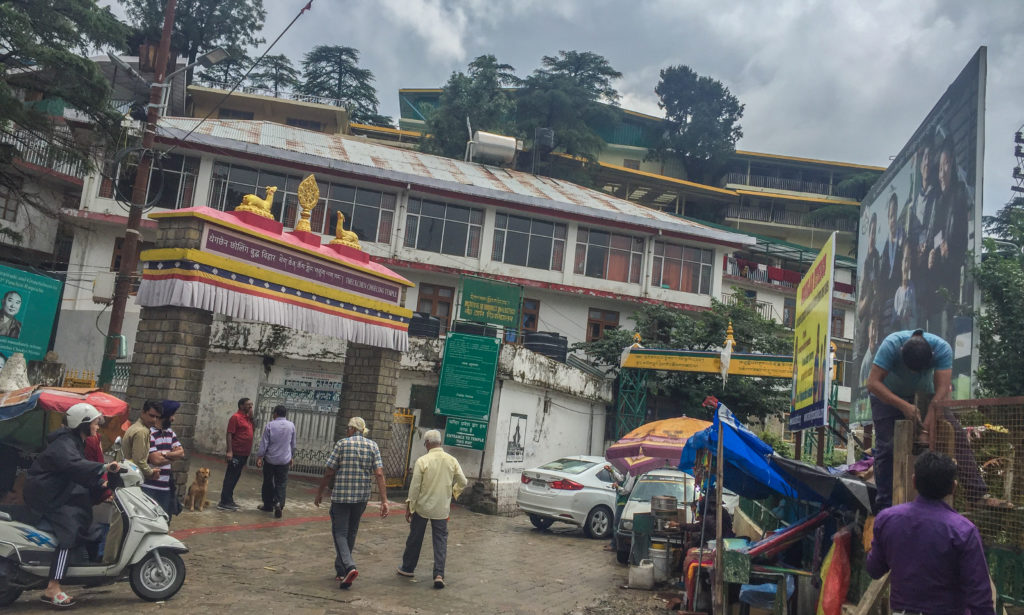 At this point we were excited that there were only a couple hundred people gathered there. Later it grew to about 1000 but we heard the stories of the 5000- 7000 that had showed up the three days prior for the properly announced public Tibetan Youth Teachings.  Somehow this was all turning up Milhouse.

Before His Holiness came out to begin, we were navigated into groups by country.  Naturally, in a calm manner Juliana and I suddenly found ourselves surrounded by Canadians. Feeling the comforting energy and smiles of the other 20 Canucks we began talking to one girl who was inviting us to join her and a small group of vegans after the event in an action to help make connections for Tibetan youth between Buddhist values and veganism, what a lovely idea. Around this point is when the “refugees” showed up. They were the people who had arrived to the Temple without enough people from their home country in attendance to form an official group of their own to greet the The Dalai Lama. They told us that a couple of other groups they had already tried to sit with wouldn’t let them assimilate because of their nationality (this was definitely weird in a temple attached to the home of one of the worlds most peaceful, welcoming, and embracing human beings).  So, of course, as courteous Canadians upholding our reputation, we all welcomed them with open arms. And our country grew not just in size but in value. <3 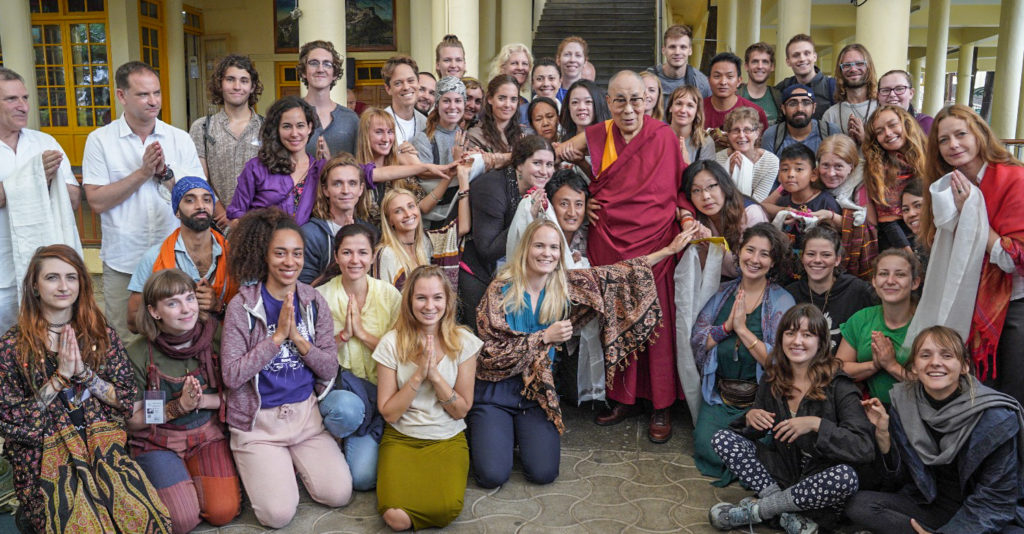 Canadians with The Dalai Lama, June 2018

When The Dalai Lama passed through the gates of his home and into the temple, the energy of the entire room turned electric. I’d never felt anything like it. He and his entourage of monks and camera men made their way from group to group, country to country, and the energy only electrified further. With burning buckets of incense you could feel everyone’s breath being stolen with each further step. As he started to approach our Canadian group it felt incredibly surreal. He looked older than I imagined but with his growing smile a childlike vibrancy seemed to perfectly match his physical form so perfectly. As he walked to join us, our group parted for him right down the middle to politely make room for him. And that’s when it happened, he reached out and took Juliana’s hand. And then like a magnetic force all of our hands automatically reached towards and attached together as one. It was magic. Hands on top of his, as his softly held hers.  I’d never felt anything like it in my life. I’ve possessed my share of skepticism over the years, about human energy and spiritualism and a universal force that binds us all together. Recently I have worked incredibly hard to chisel all that doubt away.  But I knew right then that at that moment any doubt hanging on was shattered into molecules forever. It might sound dramatic, I know. And some might suppose it was created in all our minds at that exact instant like a placebo of sorts. But I would much rather believe in a world that can have moments of magic and energy and things inconceivable by our limited minds, than one that does not. Especially when I feel it in my heart. All will end with the exact same result no matter what you choose to believe. It is our perspective that in the end creates our own experience and reality. And on this day, my truth was forged by an old man’s hand and smile. 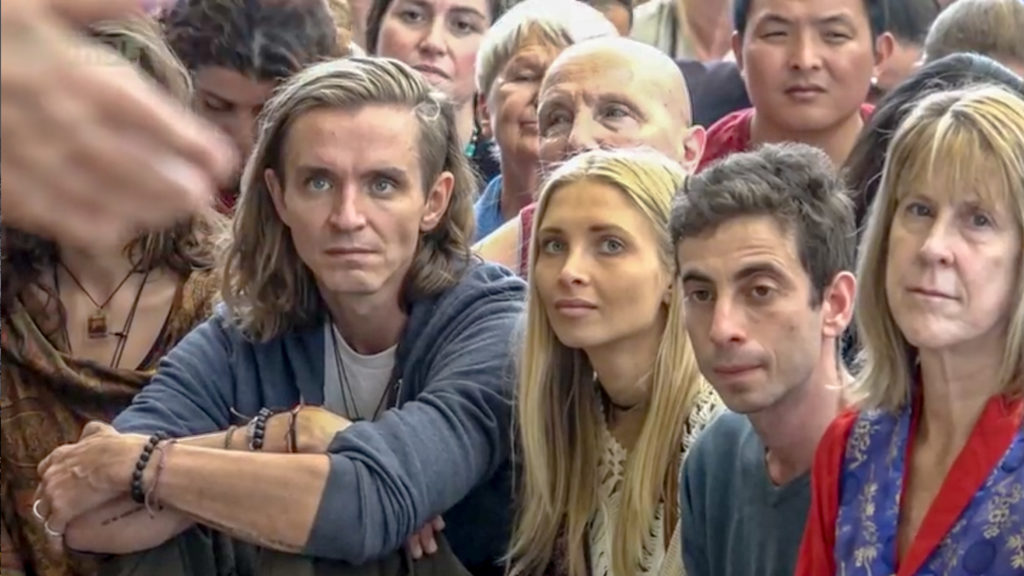 The Dalai Lama Teachings In Dharamshala

His talk was so special that day. We somehow managed to sit in the front row.

It almost felt like I was in grade school sitting on the floor with the rest of the class. But with all respect to all of my best and worst classroom teacher’s of life, not one comes close.

We will share the link to the question answer portion and encourage you to watch it. And share it. And consider it deeply.

Also, to read up on Tibetan history: the struggle, the travesty, the pain, and the human triumph. We have learned a lot being here. And the deepest lesson seems to be that somehow resentment doesn’t seem to exist- only hope and love and peace. So beautiful. Such a tapestry of the most serene tonality of the human spirit. 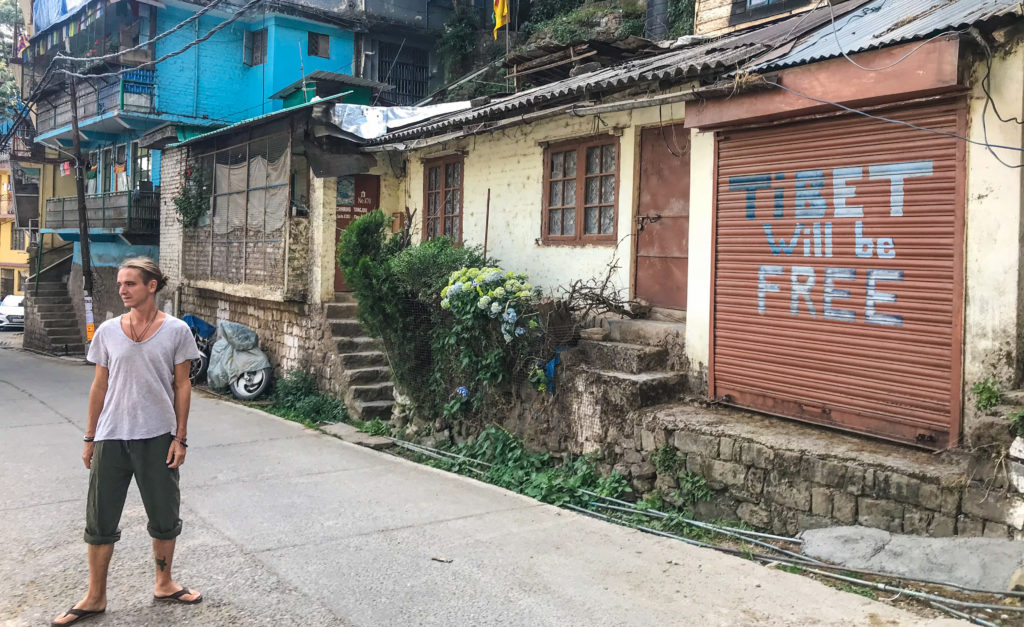 If there is one thing that stood out that day, it was that we all seemed to have congregated there in search of some kind of answer.

Looking to make more sense of this mad world and each of our places inside it.

But the answer that each of us took home that day was much simpler than we might have thought.

It was so easy to assume that we need exposure to enlightenment to help us find our own individual inner peace.

But its actually inside each of us already. Both enlightenment and peace.

It doesn’t matter what religion or belief structure you follow.

How wealthy you are.

Nor where you are from -or your gender or age or the colour of your skin.

The answer to our collective confusion softly resides at the core of just one simple idea.

The same idea that is at the foundation of every spiritual teaching on Earth.

And over and over we complexify and ignore it, and layer it with dogma and scripture, and doubt it and divide ourselves further all in the process.

But that day there, with all of his simplicity and kindness and energy radiating forward, it seemed too obvious for once.

And I realized that sometimes we all just need a reminder…

to simply do good, and be good. 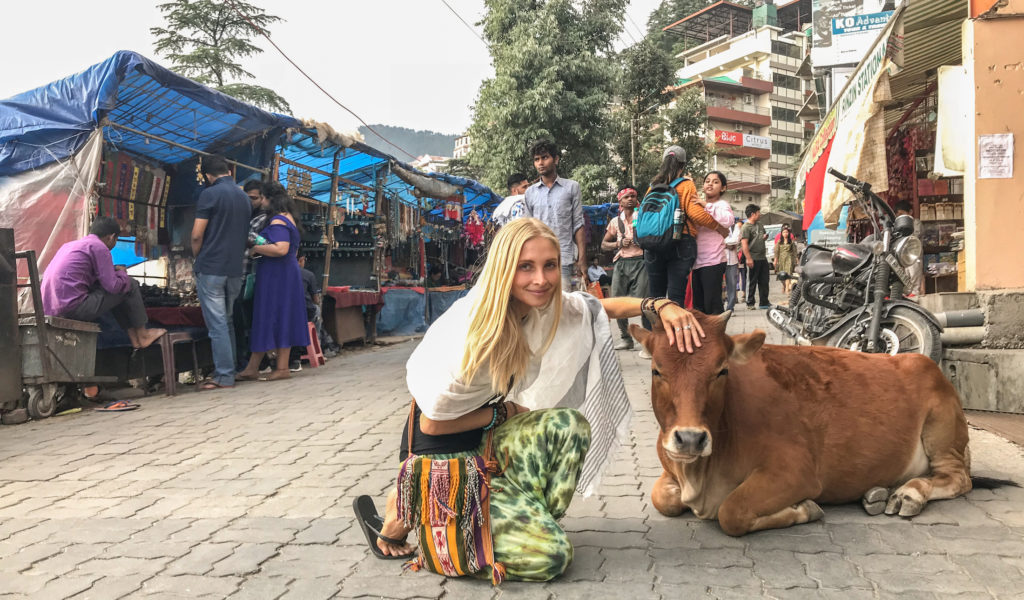 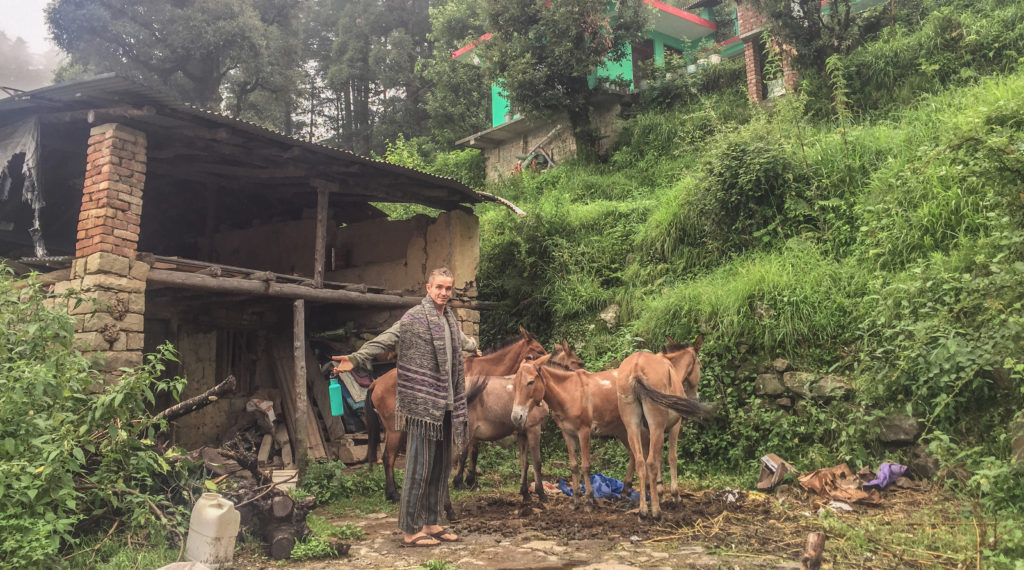 Peaceful Hike Down From Dharamkot India 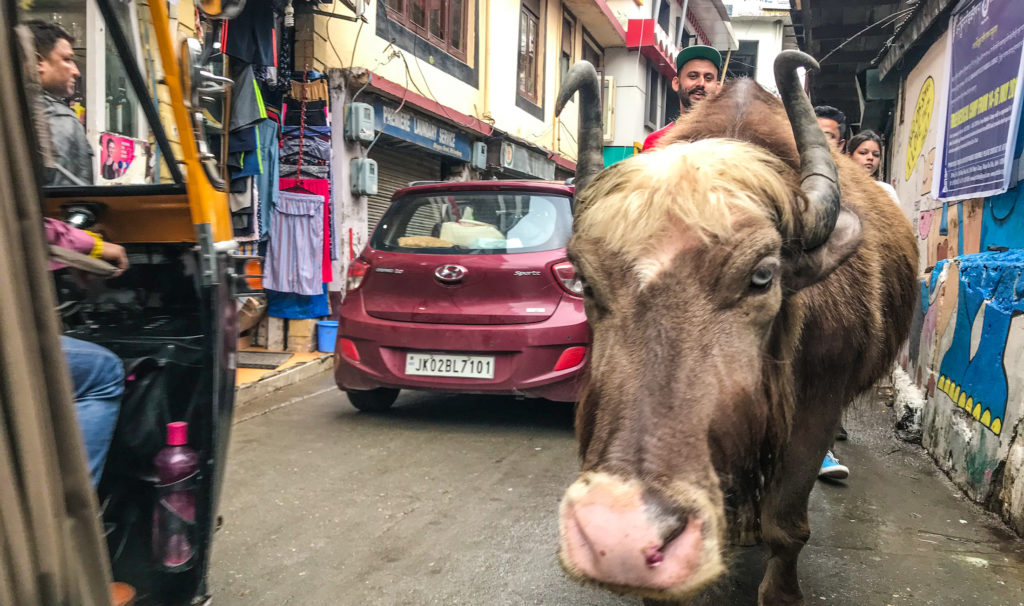