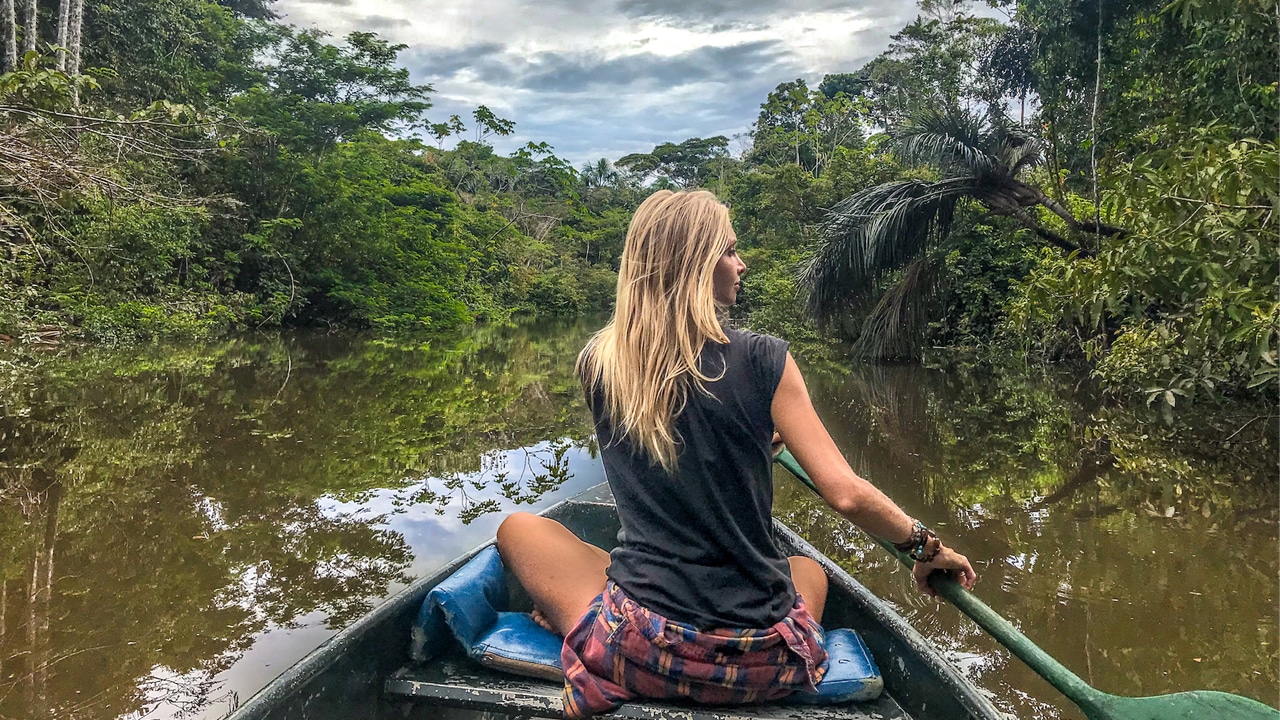 Eco-Tourism In The Amazon… Just Go!

We had no idea what we were in for. It was literally the night before when we spontaneously booked both our flight and our stay at the Otorongo Expeditions Eco Lodge on the Amazon River. We were looking for eco-tourism in the amazon and Otorongo’s tag line was “Promoting the sustainable development of the environment in the Peruvian Amazon since 2006”, so the only thing we could be sure of was that we would at the very least be in the clutches of people who we share some of the same ethos and values with. But I can’t stress enough… we had no idea what was in store. 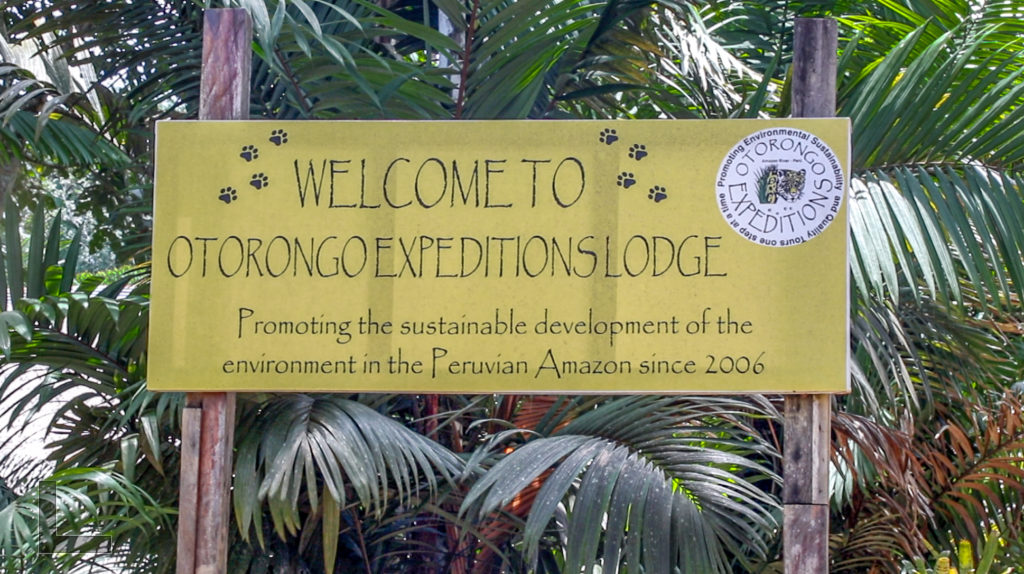 Our Amazonian Eco-Friendly Lodge In Peru.

Our whole lives the Amazon Rainforest has been shrouded in mystic mystery. The ideas that came to mind when we thought about it were only images brought to us by movies and adventure tv shows. When frantically googling to find as much information as possible from our little homestay at the tip of Peru’s Sacred Valley the night before, it was somewhat disheartening to first stumble exclusively onto a slew of high end rain forrest experience hotels and resorts. All we knew is that we were searching for something “real”, and whatever that meant in the Amazon rainforest we were desperate to figure out. 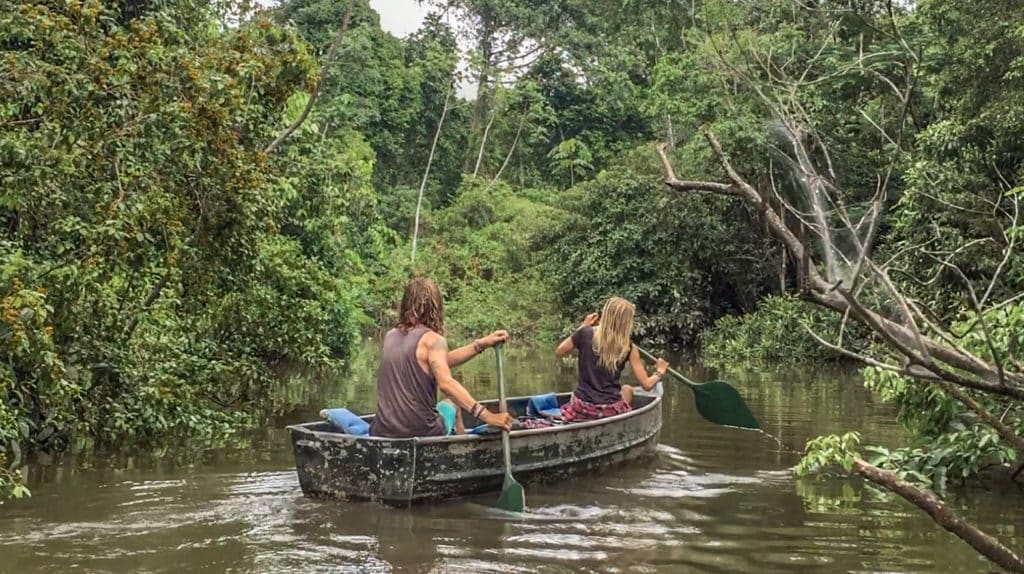 Paddling our Boho Beautiful canoe through the Amazon River

We had just watched the Leonardo Decaprio produced documentary “When Two Worlds Collide” on Netflix and we were inspired. Inspired so much by the horrific story of 1st world capitalism’s clash with the indigenous of the Amazon that we wanted to see the rainforest not only in its beautiful natural state, but also in a way that would support proper organizations and tour operators who are onside with keeping it in the hands of those who have taken care of it for centuries. The documentary told a tale of big business, corporate politics, and American corporations being invited by the Peruvian government to walk right in and take anything they wanted from the jungle. That, and the subsequent clash of those profiting from the situation against the people fighting on behalf of the earth and indigenous people who were being sold short under the guise of a government’s economic fairy tale. It was a hard watch but well worth it. And somehow because of it, the next morning we boarded a plane to the gateway of the Peruvian Amazon – Iquitos. 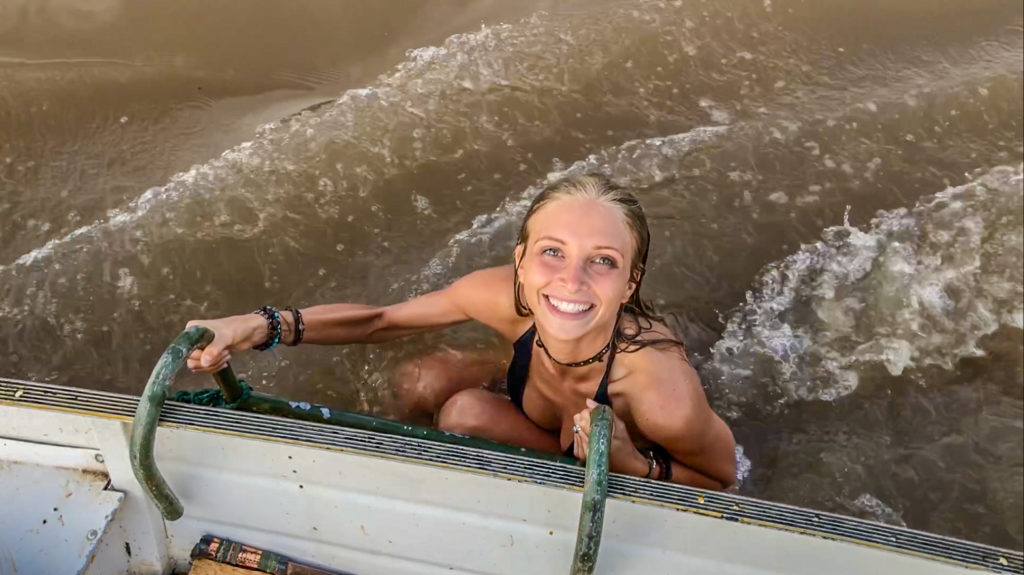 Juliana swimming in the Amazon River of Peru.

We couldn’t have left Iquitos any quicker. Definitely not our favourite place to bring our head above water. We hastily and dangerously were taxied across town and aboard a boat on the Amazon River. Just before leaving cell service I grabbed a screen shot of the map of our exact location. It was pretty surreal, a little blue dot in the middle of the world’s largest/longest river. We both took a moment together to take a deep breath and acknowledged the fact that at any moment… we would be completely off the grid. 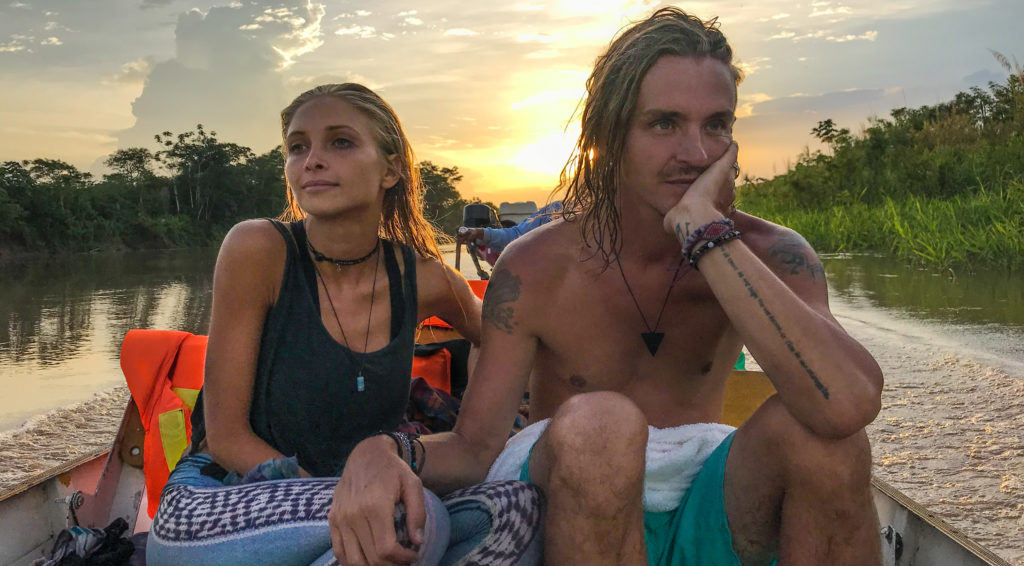 The lodge was very little to write home about from a western state of mind. But it was everything we will tell our children about from our adventurous hearts. Upon checking in, we were informed with a sly smile that the “Honeymoon Suite” had been reserved for us and we soon learned why they were smiling. lol. It was completely basic and raw, our kind of honeymoon suite for sure. Perfectly acceptable for what we were looking for- It had a hammock, a mosquito net, and no hot water. 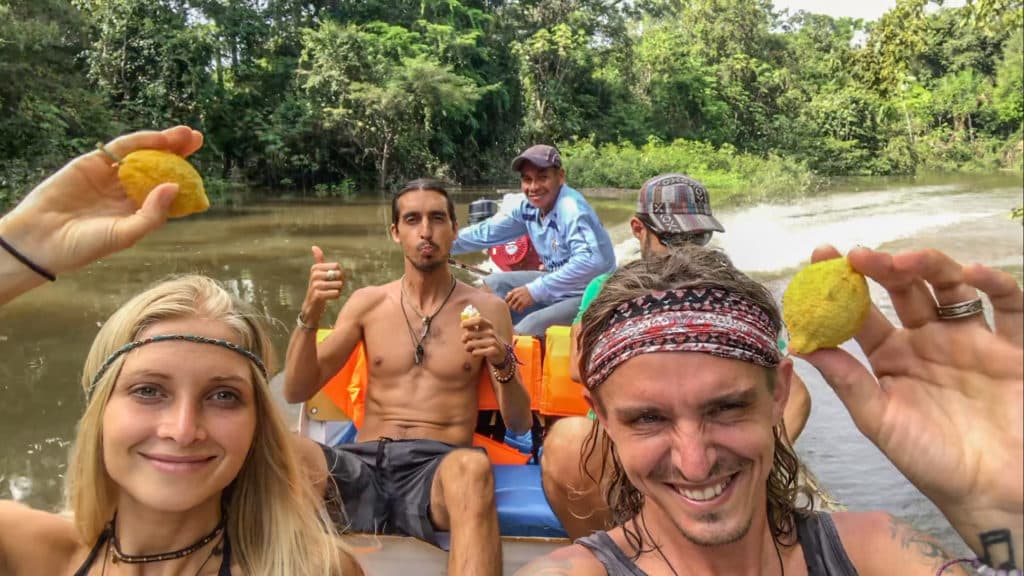 The owners and operators of Otorongo were such beautiful people, which is always an added bonus, plus our guide Paul had spent his whole life in the Amazon and every spare minute he wasn’t with us his nose was planted in some kind of jungle encyclopedia of either plants, animals, or survival techniques.  When we met him, his first words to us were… “at Otorongo this is your adventure, I have many suggestions and will keep you safe, but you will pick everything you want to do from the minute we arrive until you leave.” So we ended up choosing and accomplishing the following itinerary pieces: 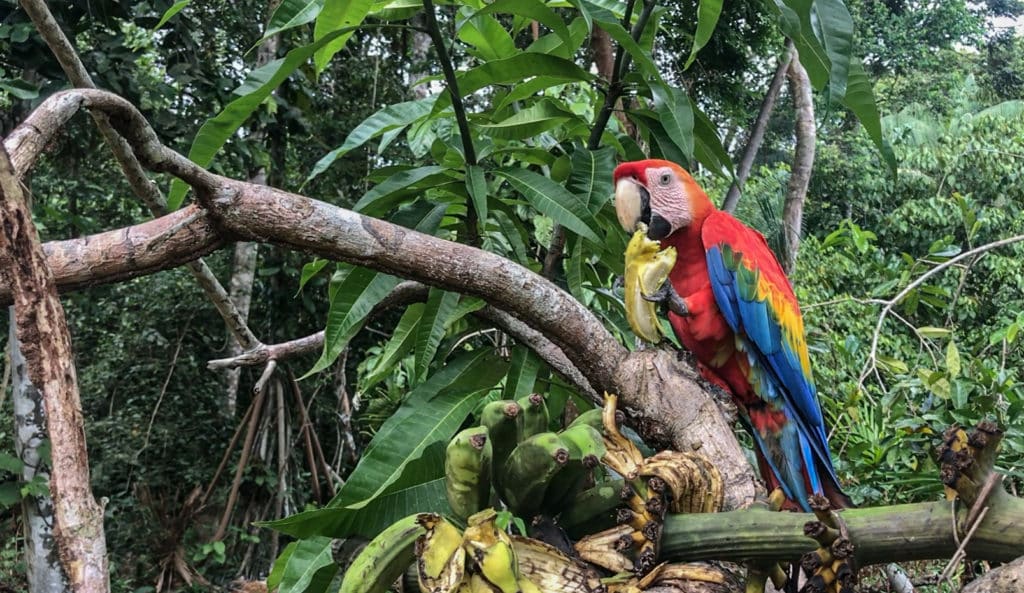 The only disappointment for us in the end was that it was raining so frequently throughout each day that we were advised NOT to go on the overnight camping expedition in which we would have slept in tents in the middle of the dark noisy crazy jungle madness. Can you even imagine?!  Editors Note- this was perfectly acceptable to Juliana. 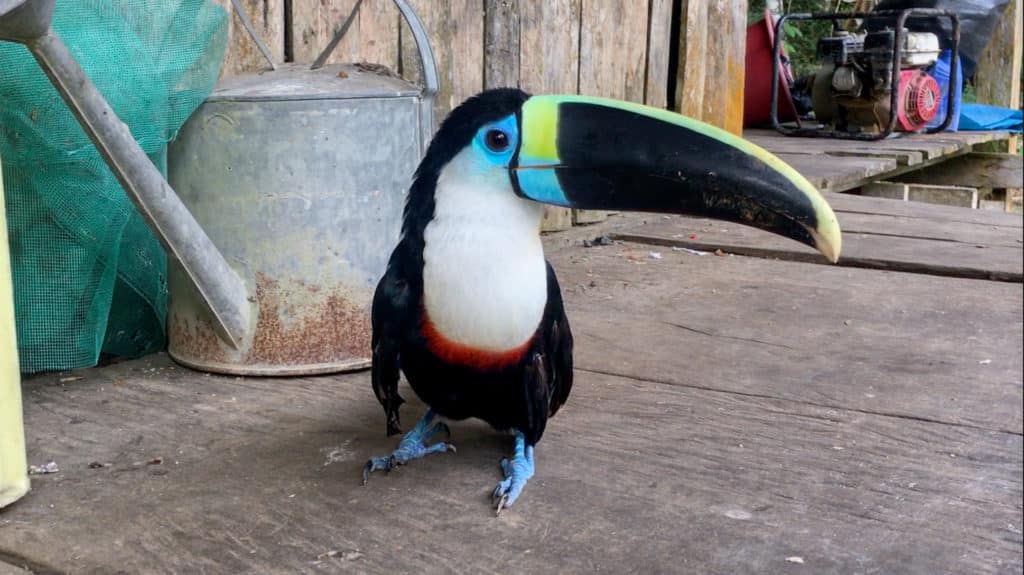 Our friendly neighbour Juanito! Welcoming us each day.

The entire experience was a complete crash course on all levels from the minute we woke up until our exhausted heads tumbled to our pillows. We met the smallest monkeys known to man, learned about trees that can blind you if you break their bark, ants and frogs that can poison you like scorpions, made friends with a toucan named Jaunito and his three parrot friends, found caymans in the river at night, intentionally bypassed the piranha area of the river, ate so so so many fruits we didn’t even know existed, and on and on and on and on. 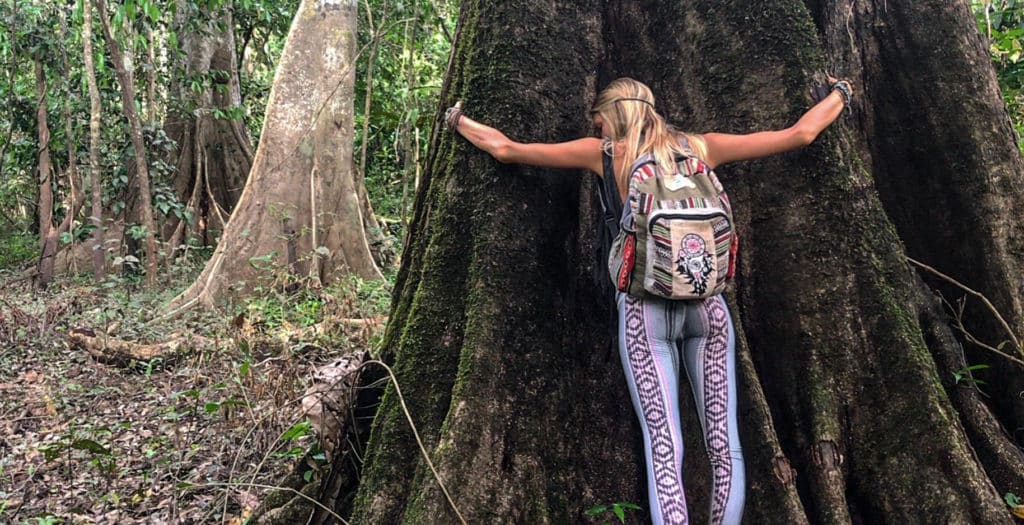 Feeling the incredible energy of the sacred ancient giant trees.

Paul was a resource of endless knowledge and information about one of the most biodiverse regions of the planet with one of the longest and largest rivers running right through it. The most fascinating part was learning that the Amazon Rainforest is responsible for cleaning more than 80% of the oxygen on the planet- they call it the Earth’s lungs- and there have been people who have lived in harmony with it since the dawn of man. It’s disappearing though. Our human footprint is too heavy and our “economies” seem to demand it. So I’m glad we went to visit it through a sustainable eco-friendly option. It doesn’t make sense to do it any other way. 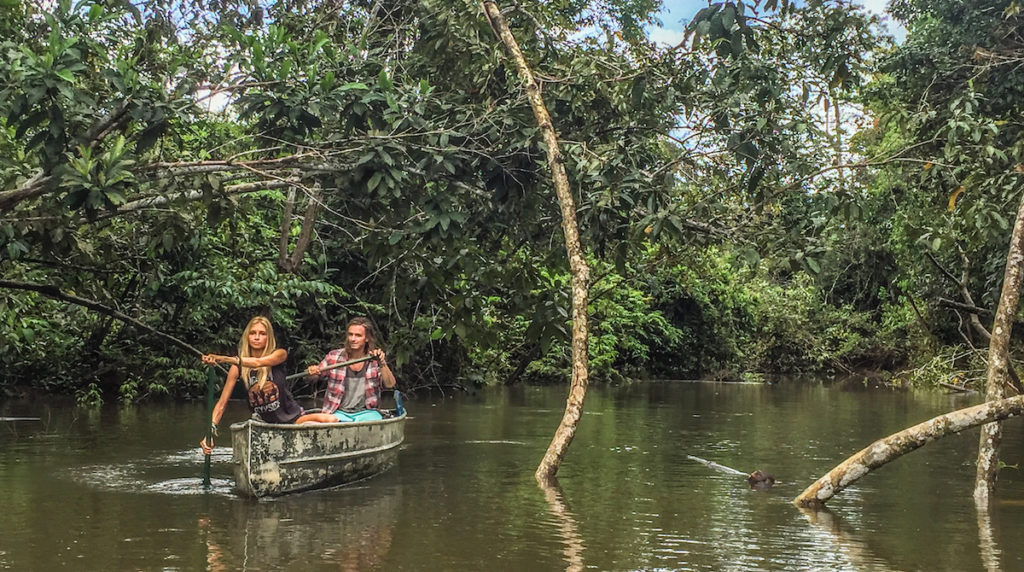 At night the entire jungle sounded like a symphony of nature. During the day the air felt like the most invigorating prana charging through our lungs. The entire time we were there everything was so alive everywhere around us at every moment. It was electric and energetic and breathtaking. Looking back, I still have a hard time believing we were there. It is just one of those places that you visit in a dream: wild and free and untouched and untamed- Just like we romanticize our hearts and love might stay forever. If you get a chance, just go. Look for this or other options for eco-tourism in the amazon, forget about the resort life for just this one time. And lose yourself for a while. We are so glad that we did. And I’m personally so glad Juliana wasn’t swept away and married to a river dolphin like the legends of the river tell. That would have really put a damper on my boat ride home. Instead we waited for Iquitos to do that, as well as our cell phone’s when they kicked back in and our digital reality reared its demanding head our way. Like Jack from Lost always said, “we have to go back”.

and much thanks to the fine people of Otorongo Expeditions Eco Lodge.